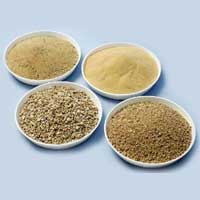 BENTONITE is the important naturally occurring clay of great commercial importance possessing inherent bleaching properties. It is, therefore commonly called bleaching clay. It fall mainly under montmorillonite group containing a varying amount of attapulgite. The montmorillonite is designated by the chemical formula (OH4).Si8.O20.nH2O. The clay minerals of montmorillonite and attapulgite groups are distinguished by their adsoption characteristics. The chemical composition of these clays is similar to that of other common clays and it is rarely that these clays can be identified by chemical analysis. It is by X-rays, D.T.A., electron microscopic as well as by staining techniquished. The natural activity in the clay is determined by actual trials. The other important property of the montmorillonite group of minerals is possession of exchangeable ions.

Properties:
Two types of bentonite are generally identified. One is called the swelling type or Sodium Bentonite, which has single water layer particles containing Na+ as the exchangeable ion. The other has double water layer particles with Ca++ as the exchangeable ion. It is called Calcium Bentonite or non-swelling type. Na+ or Ca++ is exchanged by Mg++ or Fe++. A third type of montmorillonite has been identified with zero water layer particles and is probably electrostatically neutral. Calcium bentonite is usually referred to as fuller’s earth by a number of authorities because chemically and also in physical properties it is identical to calcium-montmorillonite.

In the early years, all naturally occurring activated clays having good bleaching properties were called fuller’s earths. The word fuller’s earth has been named after the practise of fulling or cleaning the grease and stains from wool and cloth.